Joyce Weaver has been a receptionist in the Radiology Department at Chestnut Hill Hospital for the last 14 years. She had been working in housekeeping for six years before she applied for a new position at the front desk.

During the COVID pandemic Joyce Weaver never called off work. She consistently worked late without overtime pay just to help patients and to support her coworkers because she said, “That’s what a team does, we all work together to get the job done. And our hospital was in a crisis with COVID.”

“Tower’s decision is an insult. It’s unbelievable just how much one hospital can utterly disrespect their most dedicated workers when I gave, and continue to give my all to our patients and families,” said Joyce Weaver.

“I often take an elderly patient in a wheelchair to their changing area, help them change into their gowns before their CT Scan, sit with them and check-up on them before their tests. I’m constantly keeping a close watch over patients in our waiting room because some of them passed out or almost fell.What happened to the value that patient care is a team effort? Especially when I’m running back and forth to my desk and juggling everything at once.”

By a miracle Joyce Weaver never tested positive for COVID-19. But she was scared to come to work thinking she might contract the virus. But despite her fear she never called off work.

Joyce lost a good friend who was forced to go on a ventilator but never recovered. She would even see patients from the community come to Chestnut Hill Hospital who were severely ill from COVID.

“It was, and continues to be a reminder how exhausting it is to work in a hospital – the trauma and pain is real,” says Weaver.

Patient transporters, ER workers, many techs, and CNAs and other job titles received various retention bonuses and hazard pay from the federal “American Rescue Plan Act” (ARPA) that was intended to recognize and reward healthcare workers who served during the COVID pandemic.

The federal tax dollars were first distributed by the Pennsylvania legislature and then to hospitals and major corporate health systems who have discretion how they can distribute the ARPA funds to healthcare workers and was meant for bedside caregivers and frontline staff.

One major issue was that the rules prohibited “sub-contracted” employees from receiving retention bonuses, which affected employees at Tower Health’s facilities in Pottstown and Chestnut Hill.

It meant that dietary and housekeepers at Pottstown and CHH, who are constantly short staffed and paid poverty-level wages, were actually prohibited from receiving the federal hazard pay or retention bonuses because the hospital industry outsourced food and housekeeping and environmental services to third-party vendors.

Similarly, Chestnut Hill Hospital’s arbitrary decision by management to cut out various healthcare workers from ARPA funds, many of which are low-paid, shows how little the hospital actually cares about its entire workforce. 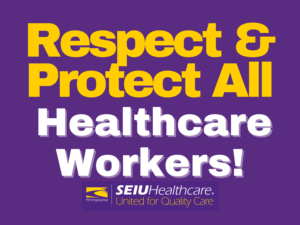 “The shocking and frustrating thing is that this isn’t Tower’s money – it’s our tax dollars that were meant to recognize, respect, and retain people like me, the essential workers who did our jobs during the worst of the pandemic. How would anyone feel if you did your job, and sacrificed yourself to care for others in a time of crisis, and then your employer turns right around and says your work wasn’t that important?

“Tower Health’s greed and disrespect knows no bounds. They don’t see us as professionals who are doing our jobs caring for people,” said Weaver.

“Tower is trying to split us apart and divide us. But we’re going to stand up and fight back against Tower’s greed and utter disrespect for the essential healthcare workers who make this hospital run,” said Joyce Weaver.