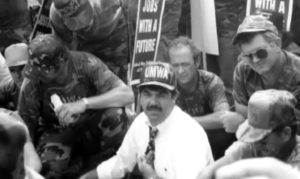 Born to a coal mining family in Nemacolin, Pennsylvania, Rich went to work underground at the age of nineteen. He joined the United Mine Workers of America at a time of conflict and ferment. Rich left the mine to study law in order to build the movement to renew and rebuild the UMWA. In short order, he became a miner’s advocate and district union leader, then won election as UMWA President when he was just thirty three years old. Rich led strikes for decent wages and family supporting benefits at Pittston Coal and Peabody Coal. While challenging corporate greed with creative and aggressive tactics, Rich reached out in solidarity to South African mine workers and helped build pressure to end the racist Apartheid system. Under his leadership, the coal miners inspired a new generation of the labor movement. That’s why then SEIU president John Sweeney chose Rich as his partner to campaign for leadership of AFL-CIO on an organizing, reforming agenda, and why union leaders elevated Rich to serve as AFL-CIO president after John’s retirement.

Not long before his untimely death, Rich was on the picket line, raising his voice once again striking mine workers in Alabama. He stood for the rights of working people, people like the family that raised him in a small town in western Pennsylvania. He never forgot who he was and where he came from. My heart goes out to the Trumka family and all the unions of the AFL-CIO.

The members of SEIU Healthcare Pennsylvania will honor the memory of Richard Trumka by organizing and building our union. That is, after all, just what he would have wanted.