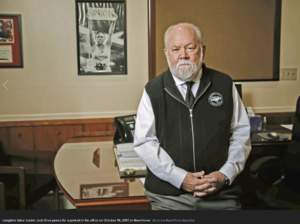 Jack Shea was a towering Pittsburgh trade union leader who we lost this August at the age of seventy nine.

Jack was born in 1942 in the eastern suburbs of Pittsburgh. He came into the world at the height of World War II, when union mill workers in Allegheny County produced more steel than all the fascist countries combined. Jack grew up in an Irish Catholic working class family. He attended the Connelly Vocational School in the Lower Hill District before finding work in a non-union machine shop on Braddock Avenue.

It was in 1967, in that machine shop, that Jack risked his job by standing up to organize a new union local of the International Union of Electrical Workers (IUE). Jack helped his coworkers win union recognition and secure their first union contract. He went on to serve as an IUE organizer and organizing director, leading workers in tough campaigns against ruthless union busting factory bosses across the Midwest and the South.

This experience as an organizer informed his leadership when in 1998 he was elected as President of the Allegheny County Labor Council. He led the ACLC for almost twenty years before retiring in 2017.

Jack raised our expectations for what unions could do together. His demeanor was gruff and dour, but he had a sense of humor, an ability to build relationships, see the angles, and make the right remark that kept the labor movement together. He called it “herding butterflies”.

Jack united the unions of western Pennsylvania to support SEIU organizing. He marshaled the resources of the AFL-CIO to help AGH nurses win their representation election in 1999 and make sure that management negotiated a breakthrough first contract. He supported the janitors and security guards who formed their unions with SEIU Local 32BJ. At every turn, he spoke up for the rights of UPMC hospital workers to organize without being coerced. Jack never forgot how he felt as a machine worker standing up trying to win union recognition, so he never took the union for granted. Because he spent years as an organizer, he instinctively understood the hope and the fear of unorganized workers. He knew that organizing would determine the future of our labor movement.

Jack had heart for people who fought for their rights.

I’m proud to have marched in the streets of Pittsburgh with him.