Scroll below: take three actions to build our political power.

We proved we’re a force in Pennsylvania politics. Now we must elect Attorney General Josh Shapiro as Governor because our right to keep our union is on the line.

We are proud to announce that our union won 24 of the 25 primary races where candidates championed #UnionsForAll! (See the complete list of races below).

One of the most inspiring victories was Summer Lee for the 12th Congressional district in Pittsburgh where our healthcare workers were absolutely instrumental getting Summer over the finish line.

Another remarkable primary victory was Tarik Khan, a frontline nurse in Chestnut Hill. Khan handily beat an incumbent and spoke out for all frontline healthcare workers that we need living wages. Khan is a strong advocate and supporter of the Patient Safety Act to end the short-staffing crisis and said he will be a voice for all caregivers in Harrisburg.

But when it comes to the future of our union, the May 17th Primary produced a profound contrast for the race for Governor between Attorney General Josh Shapiro, who our union endorsed, and State Senator Doug Mastriano, an extreme right-wing candidate who would take away our right to our have union.

Mastriano was also one of only a handful of PA Senators to vote to keep Pennsylvania’s minimum wage at an embarrassing, unsustainable $7.25 an hour.

Meanwhile, Attorney General Josh Shapiro has proven himself as a pro-worker champion. He’s held companies accountable when they rip off their workers. Last year, he prosecuted the largest Davis-Bacon prevailing wage case in American history: winning more than $20 million in restitution for Pennsylvania workers.

Josh went after bosses who broke the law, like nursing homes administrators who falsified staffing records and left staff and residents in unsafe conditions. Josh stands with caregivers to demand safe staffing standards. He took on UPMC and won. By securing an agreement between UPMC and Highmark he guaranteed 1.9 million Pennsylvanians their right to choose their own doctors and hospitals.

The choice for essential workers and all working families couldn’t be more clear — our voices we will be the difference in this year’s election. It is up to us to strengthen our union, build a coalition of working families across the entire state, mobilize our co-workers and loved ones to vote on November 8th, and use our power to determine our own future! 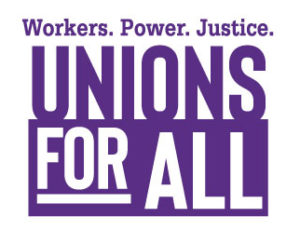 Then share this link with your co-workers and loved ones to register 10 new voters!

Urge those you know to also sign up to vote by mail!

3-Donate to our COPE political fund to support #UnionsForAll candidates

Every day healthcare workers advocate for our jobs and those we care for at the bedside, but we also know decisions are made by elected leaders in Harrisburg and Washington that affect staffing, wages and benefits, safety, and our union rights.  That’s why we contribute to COPE: So healthcare workers have the resources to elect leaders who will fight for what’s most important to us as caregivers. 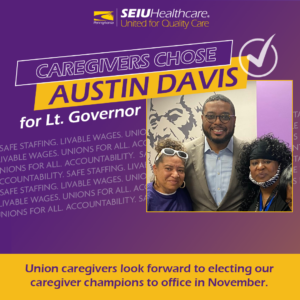 At the top of the ticket, SEIU congratulates endorsed champions Josh Shapiro and Austin Davis. Please see the election night press release on the stakes of the gubernatorial race, SEIU’s top political priority.

We congratulate Lt. Governor John Fetterman on his commanding victory, and we know that because of his fierce support of union members and not-yet union workers, we will prevail in November.”