Shapiro Joined Rally with Philadelphia Parking Workers Demanding their Union, Followed by a Roundtable Discussion on the Importance of Unions for All, Living Wages, and Uprooting Structural Racism 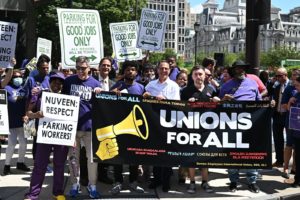 Josh Shapiro first joined SP+ parking workers at a rally demanding good living-wage jobs, and the right to freely organize for a union. 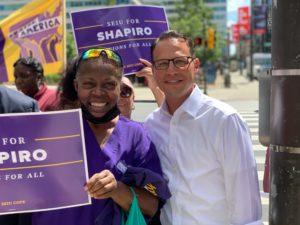 Following yesterday’s rally, Shapiro and Verrett joined workers who are actively organizing for a union at their workplaces for a roundtable discussion on how not-yet union workers across industries are coming together and taking action to reject the status quo that has never worked for working people. As the next governor, Josh Shapiro has pledged that he would not just defend union rights, but expand them — helping every Pennsylvanian who wants one to join or form a union.

“As governor, I will protect the union way of life. We have to make sure that workers who come together and organize and mobilize will know that they have the government of the Commonwealth of Pennsylvania behind them making sure that they have a fair shot,” Pennsylvania AG and gubernatorial candidate, Josh Shapiro, told workers at the roundtable. “We need to make sure that there is a level playing field and that there is a fair opportunity to organize. And we will use the power of the government of the Commonwealth of Pennsylvania to make sure you have that opportunity to organize and mobilize.”

In the post-rally roundtable, union and not-yet union workers shared the stories of how they are fighting corporate greed and organizing their workplaces. Workers are united in demands for elected officials at all levels to advance good, union, living-wage jobs across the economy, check corporate power and uproot structural racism.

“Unions combine my strength with the strength of hundreds and even thousands of other workers who are all fighting for good paying jobs, and dignity and respect while we do our jobs. SP+ parking needs to be held accountable by us the workers. But there are also companies, like the corporate investment firms Nuveen and TIAA whose companies do business with SP+, that should demand SP+ be a responsible contractor.” said Latrelle Jackson, former SP+ parking worker. “I support unions for all, I support Josh Shapiro and his union strong vision for Pennsylvania.”

“After working as a caregiver for so many years, it’s critical to me that I finally have a union behind me. The only way caregivers will win the higher pay and benefits we deserve is by standing together and using our strength in numbers to fundamentally change the system that has undervalued us for so long,” said Sherry Giordano, Direct Care Worker, UHWP/SEIU Member. “

It is unacceptable that caregivers live in poverty and work multiple jobs to get by. It is immoral that we lack the health insurance we need to care for ourselves when we dedicate our lives to caring for others. Our union is our path forward to making home care jobs good jobs.”

Thursday’s rally happened amid a series of actions, backed by SEIU, where thousands of workers throughout the country are taking to the streets and raising their voices to demand unions for all.

“Workers are organizing, mobilizing to build power. We are taking this same energy into the midterm elections to make sure that alongside unions for all we build a government that works for all,” said SEIU Secretary-Treasurer April Verrett at the Philadelphia roundtable. “It is not enough to just defend union rights, workers need champions who will expand union rights. Every single worker in this country deserves a seat at the table.”

Thursday’s rally and roundtable come as working people nationwide exercise power like never before: striking, bargaining strong contracts, winning unions and demanding a seat at the table with employers in states and cities across the nation. And as the November elections approach, working people are escalating demands on elected officials to take action to unrig our economy and build a government that works for all of us.