Today, union members across Pennsylvania come together to celebrate our families and communities and to renew our bonds of solidarity with each other. This 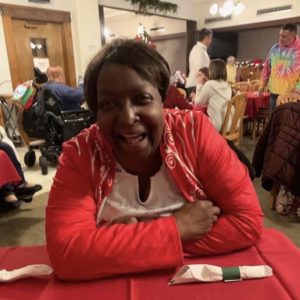 Labor Day, we gather in the spirit of Carol Jones, an extraordinary labor leader who died two days ago, on September 3rd, 2022, aged seventy four.

Carol is mourned by an extended family and remembered as a pioneer of our homecare workers union. She was a loving mother, aunt, and grandmother, and a longtime member and organizer of this union. But as if this was not enough, Carol was also a member and leader in two other unions and a groundbreaking fighter for the well being of women, families, and people with disabilities. It’s no exaggeration to observe that Carol Jones was a force of nature and a maker of working class history.

Carol grew up in a family of Black coal miners and domestic workers in a small, segregated community in western Pennsylvania’s Washington County. Her people were not rich, but they placed a high value on education and participating in community organizations. In the late 1960s and early ‘70s, there were limited opportunities for a young Black woman in Appalachia who had to feed her family.  Carol worked in service sector jobs: in a laundry, as a dishwasher, and in food preparation. Carol’s chance at a better life came in 1976, when she found work at the Mariana #58 coal mine of the Bethlehem Steel corporation. 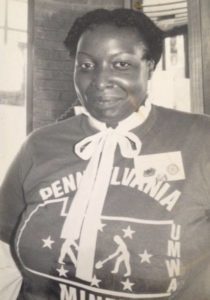 Carol became one of the first women to work in a coal mine in the United States, following the victory of Black members of the United Steel Workers (USW) to end race and gender discrimination in their industry. The new opportunities in steel sector mines in turn led to other mining companies hiring women. Carol joined the United Mine Workers of America (UMWA), receiving the guidance of union men in her family to always attend union meetings and never to run from a fire underground.

In later years, Carol recalled being cursed at and harassed with racist jokes by some mine workers. She responded with hard work, proving that she could mine coal as well as any man. She showed good humor about bad language, and apparently made her own jokes about white people to get back at racists. In time, she won over coworkers. Union men started erasing racist graffiti and defending her against harassment. Meanwhile, Carol took it upon herself to welcome women coming to work in the mines and also helped educate the wives of mining men about their union benefits and other rights. Before long, Carol was elected to her UMWA local union committee to defend the union contract, then elected as Vice President and mine safety committee chair and delegate to UMWA conventions.

After being threatened with dismissal by a mine supervisor during pregnancy, Carol became a campaigner for a right to take family leave. She organized in her union to secure family leave in the UMWA contract, then fought for federal legislation for family leave. The advocacy of Carol and other working women led directly to the passage in 1993 of the Family Medical Leave Act (FMLA). Every time a worker in America takes time off to have a baby or to care for loved ones in need, that worker benefits from the movement for family leave that Carol organized.

While raising her family, leading her union, and fighting for family leave, Carol also found time to extend the hand of solidarity far and wide. She joined campaigns to support striking British mine workers and Minnesota meat packers. She rallied to defend Black communities and oppose a resurgence of the Klan in Washington County. She helped lead a national education and organizing network of mining women. Wherever there was a fight for justice, Carol was there.

After her mine closed, Carol worked at a grocery store deli. Naturally, she served her coworkers as their shop steward for the United Food and Commercial Workers union (UFCW). Carol then became a caregiver for a consumer with an illness. She encountered the poverty level wages that were the norm in long term care. Once again, she started organizing. 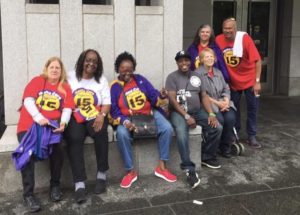 Carol played a decisive role in forming a union with SEIU Healthcare Pennsylvania at the TRIPL homecare agency. Her steady leadership persuaded administrators to accept that worker organizing could go hand in hand with advocacy by and for people with disabilities. Carol built union chapters in Washington and Erie and helped negotiate the first union contract. She helped esablish the Centers for Independent Living workforce council. Carol became a full time union staff person as an organizer with UHWP, the joint project of SEIU Healthcare Pennsylvania and District 1199C AFSCME, to unite the consumer directed homecare workforce. She was part of the historic breakthrough of 2015, helping win UHWP representation for 20,000 consumer directed homecare workers across Pennsylvania. Carol then returned to work at TRIPL until retirement, where she trained and mentored staff.

When her health declined, Carol received care at the Grove of Washington, a nursing home where caregivers are members of SEIU Healthcare Pennsylvania. On September 2, 2022, the day before her death, workers at the Grove at Washington joined nursing home workers across Pennsylvania in a statewide strike against unfair labor practices and low wages. Carol insisted that her family bring her in a rolling bed to visit union members picketing outside the nursing home. On her way back inside, she raised her arm in salute.

When her family brought Carol’s body out of the nursing home on its final journey, SEIU Healthcare Pennsylvania members were waiting with union banners hanging low. The workers who cared for Carol at the end of her life wanted to send her on her way with a gesture of solidarity and love worthy of their most honored resident.

My own memories of Carol are of a woman constantly surrounded by people. Wherever she went, she was with her family, or homecare workers, or people with disabilities, or young union organizers. With quiet decency and firm commitment, she was constantly supporting and guiding others. It is as though the boundaries between family, community, and union blurred for Carol.

All of us felt loved by Carol. All of us live with more rights and a better labor movement because of her determination to live according to her values.

Let’s dedicate this Labor Day to Carol Jones, and remember her in the struggles to come.

If we organize and care for others like Carol did in her life, then Carol will always be with us.